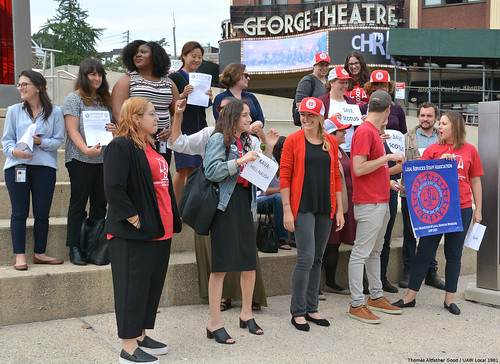 STATEN ISLAND, N.Y. — October 4, 2018. Holding signs that read ‘Kava-Hell-Naugh’ and ‘Save SCOTUS’ and chanting ‘Kavanaugh, Kava-no, the abuser’s got to go,’ two dozen members of the Legal Services Staff Association (LSSA), UAW Local 2320, stood on the steps of the Staten Island Criminal Court building this afternoon – protesting against the embattled Supreme Court nominee.


With the historic St. George Theatre stage left and the criminal courthouse stage right, a lively group of LSSA activists took part in a coordinated, five borough-wide, protest. In other boroughs LSSA members were joined by colleagues from the Association of Legal Aid Attorneys, UAW Local 2325. 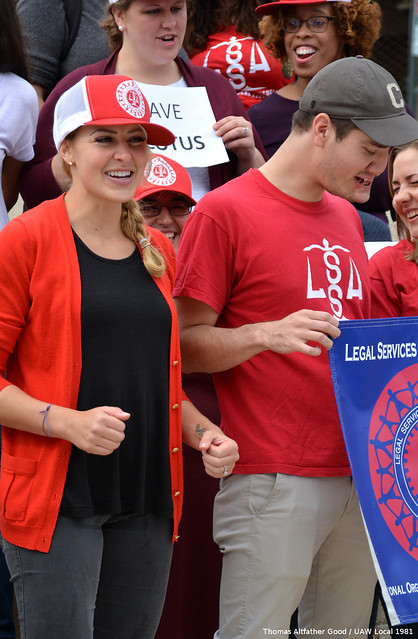 LSSA and ALAA members represent low-income New Yorkers in civil and criminal cases, protecting what they regard as their clients’ basic rights.


In a joint statement the union locals said, “If he is appointed to the Supreme Court, Judge Kavanaugh will further erode the rights of women, people of color, and other oppressed groups.” 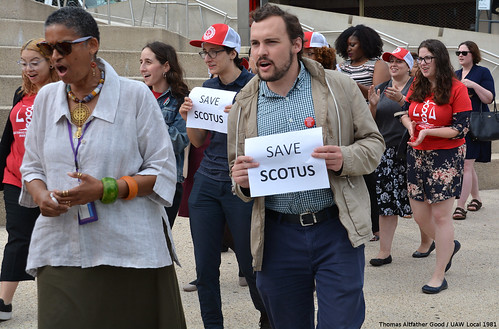 “As a Federal Judge, Kavanaugh has demonstrated his disdain for the environment, the rights of women, the rights of people of color, and other oppressed people,” said LSSA President Sonja Shield. “Even before Dr. Ford came forward, it was clear that Kavanaugh was an ideologue perfectly tailored to carry out President Donald Trump’s agenda. The Senate hearing last week dramatically demonstrated the damage these beliefs will cause.”


“The members of ALAA and LSSA stand in solidarity with all victims of sexual violence, including Dr. Ford and any other women who Judge Kavanaugh has assaulted over the years,” stated ALAA President Deborah Wright. “We stand against Judge Kavanaugh’s heinous acts and also against his jurisprudence, which demonstrates a consistent disregard for the rights and humanity of women, workers, people of color, and the environment.”


After the rally LSSA members marched down Central Avenue chanting. 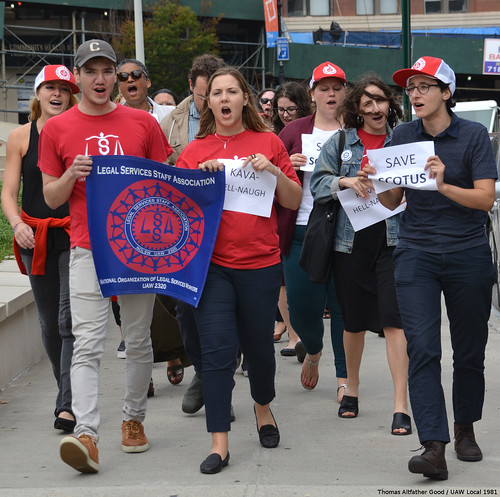 A man passing by taunted the marchers, “Confirm him, he’s a good man, better than any of you.”


“You can’t argue with that kind of logic,” one of the union members said in reply.


“I am glad to see members of our legal community taking a stand. They are in good company because more than 500 law professors have condemned Kavanaugh for ‘lack of judicial temperament,'” she said.